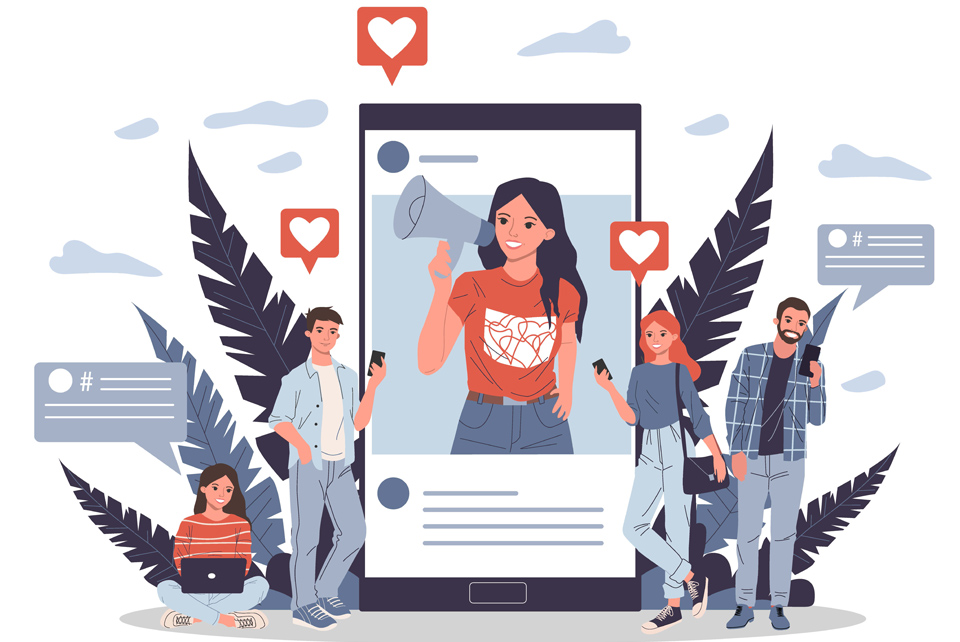 Just over one year ago I wrote my first blog piece for Your Marketing Team titled ‘How I adapted in lockdown: A Gen Z perspective.’ One year on, I’ve completed my A Levels in Photography, English Literature and Media Studies and I’ve got a confirmed offer to study Media & Creative Industries at the University of Warwick. This week I was invited to join Your Marketing Team for two days work experience, which had been delayed due to the pandemic, and Sue suggested I write another article. I jumped at the chance and realised that the topic I’d love to write about was the evolving role of social media influencers.

While most influencers denounce the very word they’re frequently defined by the media as, preferring content creators as their job title, there is no doubt that people who have a large social media audience can influence viewers' thoughts on a variety of topics. Parasocial interactions between followers and influencers purports that social media content feels like personal communication and audiences can feel like they are engaged in a reciprocal relationship with influencers.


The easiest app to become an influencer?

One of the platforms that has built its success on hyper-personalisation and relatability is TikTok, a social media app that allows users to post short videos up to 3 minutes. The platform has exploded in popularity in the last year, and has 689 million TikTok users globally every month*. TikTok's For You page algorithm helps ensure that a user can spend hours on the platform, changing video content based on what they’re liking and spending time watching. It also means anyone can go viral on the platform with a single video, which sounds absurd, until I saw someone I personally knew, garner millions of views on a TikTok in hours. Catapulting someone suddenly to an influential platform, because of an algorithm, can put immense pressure on them to perform their role as a perfect influencer imposed by internet audiences.


The impact of cancel culture

Influencers in 2021 are expected to be ethical, moral and almost perfect humans online whilst also maintaining their relatable appeal. Social media can be unforgiving to influencers who make mistakes and they can lose their credibility and authenticity as influencers within hours through ‘cancel culture’ on social media. Cancel culture is a social media occurrence in which an influencer is ‘punished' for doing something wrong, such as tweeting something offensive, by both their followers and onlookers. Frequently, the punishment includes widespread unfollowing by followers as well as obscene comments on various platforms. When an influencer is cancelled, they are forced into a period of self-reflection, where they consider their previous mistakes. Cancel culture can directly affect influencers' platform followings which results in losing income, as companies avoid working with ‘problematic influencers’.


The get out of jail free card?

However, audiences seem to be most interested in how the influencer responds in the aftermath of being cancelled. Almost every prominent online personality has produced a public apology video, notably YouTube A-listers Shane Dawson, Jeffree Star, Jenna Marbles, Colleen Ballinger, and Tati Westbrook, as well as TikTokers Chase Hudson and Charli D'Amelio in 2020 alone. Unfortunately, influencers have built a reputation over the years for their insincere and deflecting accountability focused videos that frustrate fans and are the subject of ridicule by bystanders. Since at least 2015, the “YouTube apology video” has been a meme, and it went viral in 2018 when PewDiePie released a video rating YouTuber apologies, including his own.


The benefits of using micro-influencers for your business

Micro-influencers are experts on a specific topic with a loyal audience and, although they address fewer people, they can produce more targeted results than their macro counterparts. With micro-influencers, the majority of posts on their platform are created by them, so there's bound to be someone in your niche who you can collaborate with. Some of the benefits include:

- Affordability: First and foremost, micro-influencers are a cost-effective marketing solution, with the majority charging less than £250.

- Authenticity: Non-celebrity influencers are trusted because they sound authentic and provide content that feels genuine and reliable.

- Accessibility: Reaching huge influencers or celebrities can be challenging, but this is not the case with micro-influencers.

- Engagement: The key advantage of micro-influencer marketing is engagement. Micro-influencer followers are devoted and eager to try out new items or services based on suggestions. Followers are more likely to engage with content posted by the influencer, meaning their posts will rank higher in feeds.


An influencer’s role can vary depending on what is required - content creation, client management, influencer profiling, community interaction, finance and being ASA** compliant. Remaining relevant and unproblematic in an evolving social media landscape for influencers appears to be a constant challenge and a role that will continue to develop as social media changes.