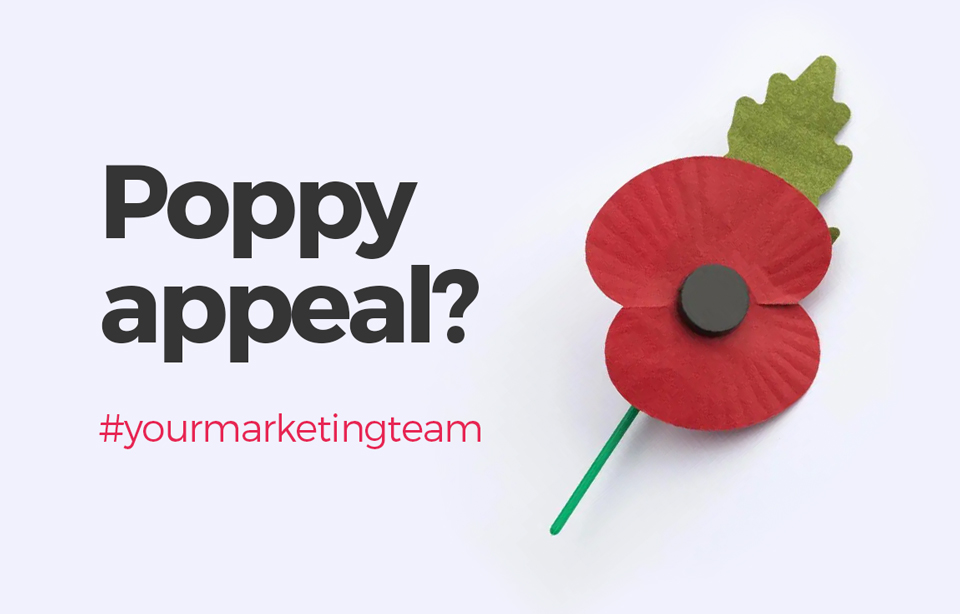 It is at this time of year that the Royal British Legion's poppy campaign is in full swing and our coats and jumpers are adorned with the iconic red flower. Whilst the poppy has an undeniable household recognition and reach, continuing to engage and maintain appeal in an increasingly competitive charitable marketplace is an ongoing challenge for the Legion’s marketing department.

The Legion adopted the poppy as their emblem when they formed in 1921 after it became synonymous with the battlefields of the First World War. 9 million poppies were ordered in that first year and almost immediately sold out on November 11th. The instantly successful campaign generated an impressive turnover of £106,000 which was used to help First World War veterans with housing and jobs. The Poppy Factory was set up, employing disabled ex-servicemen, to ensure supply for the following year’s campaign. The growth of interest continued and by the late 1920's wearing the poppy had become a key part of public remembrance.

A fall in interest

But growth of sales has not always been an upward curve. Between 2011 and 2012 donations to the Poppy Appeal dropped by £3.3 million*. The Legion recognised that in order to be best placed to continue to support the Armed Forces its messaging needed to become more current. Military charities such as Help for Heroes were running powerful and emotive campaigns demonstrating the impact that their services had for today's wounded servicemen and veterans. The Legion saw that whilst it was strongly recognised for remembrance, it wasn't so well known for its welfare work such as mental health care and physical rehabilitation. Stronger marketing tactics would be need to be fostered to engage more deeply, particularly with a younger audience. The poppy needed to become not just a symbol of remembrance but also one of hope, to show support not only the sacrifices of the Armed Forces but also for those still serving.

In 2013, a new marketing team was put into place and within the first year the Legion launched family orientated campaigns representing modern day families coming back together, following the UK's withdrawal from Afghanistan. The campaign highlighted the services and the support needed for a return to civvy street. In 2014, the centenary of the start of the First World War, the poppy appeal was launched with a dawn watch at the Cenotaph in London with their new messaging 'Live On - to the memory of the fallen and the future of the Living'. The continued campaigns for that year powerfully represented real stories of injured service personnel and families who benefit from the Legion’s support and services. This period also saw the birth of 'Poppy Days', where streets were flooded with uniformed armed forces personnel in community days dedicated to the appeal to sell poppies and engage with the public. These days now run in 5 large cities across the UK.

The Legion developed their partnership brand relationships in order to increase their high street presence, particularly recognising the importance of their supermarket partners. In 2014, they produced a memorable TV commercial in partnership with Sainsburys which told the story of the 1914 Christmas Day truce between British and German troops.

An extensive range of poppy related products was developed to appeal to a wider audience and provide an outlet for additional fundraising throughout the year. Poppy jewellery, stationary, homewares, clothing and much more can all be found on the Poppy Shop, an e-commerce site dedicated to generating income throughout the year. This investment into retail has also provided the Legion with an opportunity to communicate and engage with supporters directly. Retail income rose an impressive 140%** in just 4 years.

The Legion have harnessed the power of digital media by adopting successful promotional social viral campaigns such as #poppyselfie where users were encouraged to post a picture of themselves wearing their poppies and donate £2. This year we have seen a campaign entitled 'They Still Go' which shows the real faces of the Armed Forces as Fathers, Mothers, Sons and Daughters. This promotes the services and continued support that the Legion provide to enable these servicemen and women lead fulfilled and dignified lives when they return from service.

There remains a number of myths concerning the poppy which continue to provide a challenge for the marketing team, now and into the future. For example, that it is compulsory to wear a poppy or that remembrance only relates to the two World Wars. They still have work to do to dispel these myths and deliver their ‘Live On’ message completely. It is also inevitable that despite being fully recyclable, the environmental impact of poppy production provides a threat for the future, particularly the generation of single use plastic. However, as their new marketing strategy has taken effect and they have successfully reached out to new audiences with new messaging in new ways, the Legion have re-positioned this resilient little flower to remain strong and in full bloom as it approaches its 100th birthday. The poppy demonstrates how important it is to keep connecting with your audience and to keep reviewing your marketing to make sure it is working hard to deliver the right messaging.